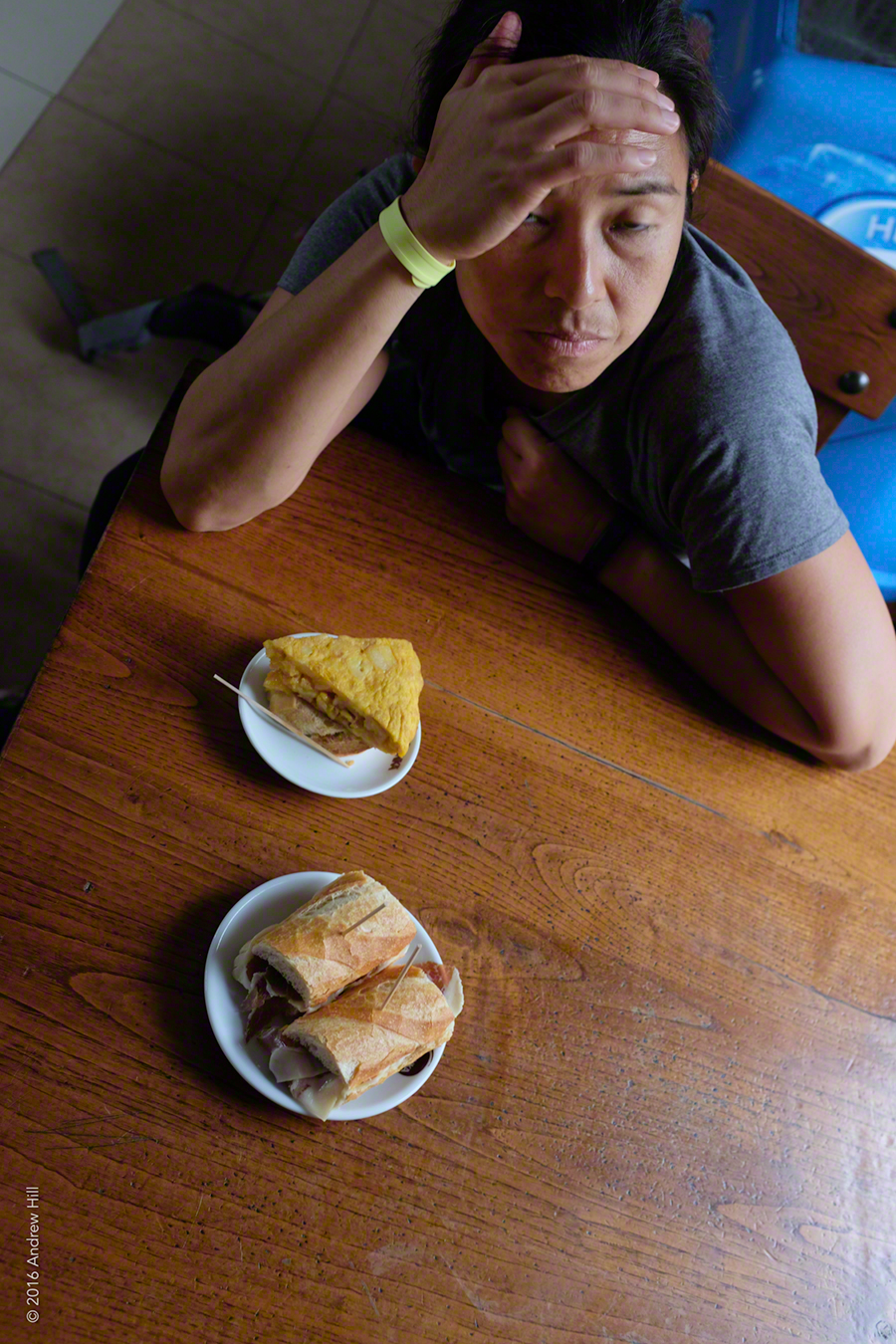 I’m not particularly religious. Yes, I was baptized and went to Catholic school and all that, but aside from the occasional Easter or Christmas mass, I don’t really pray by choice. In the past couple of years, though, I’ve found myself praying more. Mostly I talk to Lola, Lolo and Tatay, telling them about my day. And then I throw in a general ‘hi’ and ‘thanks for not striking me down’ to the Whoever is up there for good measure. On this walk, I’ve found myself drawn to pray in almost every church we’ve passed. Partly I think it’s because I feel the need to thank SOMEONE for allowing us to do this trip, and partly I think because it feels like the right thing to do. This is a pilgrimage after all, not just a walk in the countryside. I say this as a reminder to myself at the end of what was a very bad day.

The original plan was to walk from Zenarruza to as far past Gernika as possible, since we were told (by the English, Italian AND German guidebooks) that the ascent to Bilbao would be kind of brutal. Unfortunately, that’s not how it went down. What was described as a single difficult ascent toward Gernika ended up being a rollercoaster of ascents and descents, all on muddy, rocky terrain in the rain. My arches, already sore and aching from the previous days, were screaming. It literally felt like I was walking on glass shards. My lovely, patient husband suggested we stay the night in Gernika and rest a bit. So I limped the last 2km into town to one of the pensiones I found (gracias, Google). You can see from Andrew’s post, but it was a little crazy in Gernika. We had inadvertently arrived on Euskal Jaia, or Basque Day. And the pension seemed to be ground zero for the festivities. The sign at the reception desk said to check in at the bar. So I left my pack with Drew and forced my way through the crowd to the bar. The bartender saw me, and said, right off, “No English!” Greeeaaat…..but I was desperate. So in halting Spanish, yelled over the zealous festival crowd, I negotiate for a room. There is one left. Oh thank god. So I gratefully pay my 50 euro and push out of the bar.

Once in the room, we quickly shower and I get into bed. And promptly fall apart. I feel like such a loser. We’re not even a week in, and I’ve failed. We had to stop early because of MY stupid feet. Everything we own is dirty. And wet. And I’m sick of f**ing tortilla española. And all I want to do is cry.

Drew was such a saint. He bundled me up in bed, then went out and found a supermarket. He brought back food (so I wouldn’t have to face the crowds outside), and made sure our clothes got cleaned and dried. And then he reminded me that we are not trying to win a prize. We are just walking. And we’ll get there when we get there. It is too easy, especially when talking with other pilgrims, to turn this pilgrimage into a race. When we are in a group, we tend to focus on the logistics of the thing–mileage, which hostels to stop in, how much time is left, comparing gear, and so on. But I realize I don’t want that. My natural inclination is to race through life, doing as many things as possible as quickly as possible–that’s how I usually am. But aren’t I here to do the exact opposite of that? To slow down, to be in the present? So why am I getting upset that I am not hitting the milestones put out in a guidebook? That was one guy’s Camino. It doesn’t have to be mine.