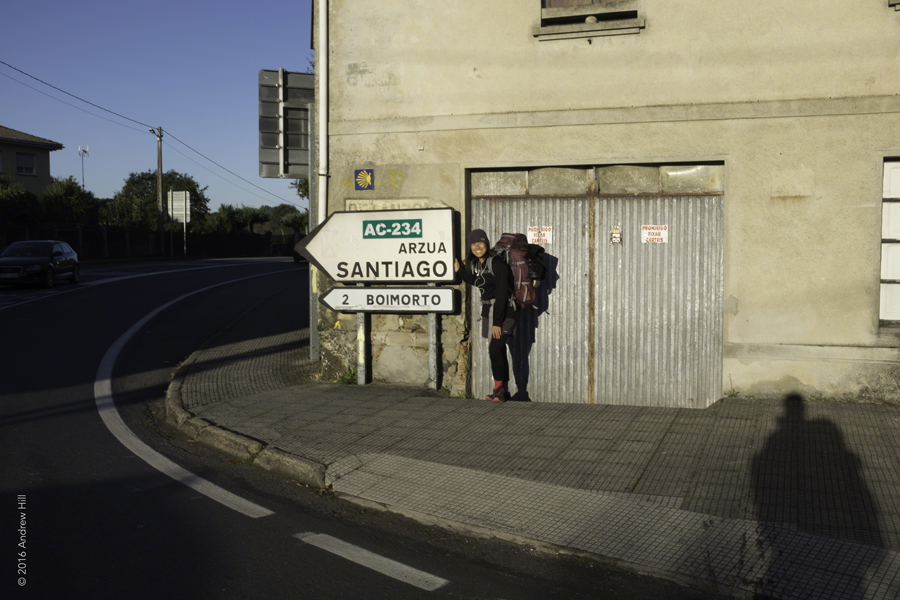 More to come shortly, but we are super excited.
THE PLAN: Tomorrow morning we get up early so as to get to Santiago, get our compostelas, and hopefully see the 7:30 pilgrims’ mass, with the incense burner (it’s very cool.)

THE NEXT PLAN: Then we rest for two nights in Santiago before proceeding to the coast (two to three days to Finestra, which in the old days was considered the world’s end, so many consider it the finale to the Camino.) There is a second compostella for pilgrims who make this extra leg, so that will be fun to get. From there we’ll take a train or bus back to Santiago, and our Camino will officially be over. We will stay in Santiago for another two nights (a very welcome gift), then begin our next adventures!

Sorry, had to add a couple things in here so we wouldn’t forget:

Part of this day’s hike went through managed forests and hunting grounds. You can see in the photos a bit of the surreal landscape–acres and acres of trees in strict lines, punctuated every once in a while by a bare, scarred area that looked recently harvested.

At one point in the early afternoon, we were walking through a dark part of the forest, tall, uncut eucalyptus trees on both sides. We hadn’t seen any other walkers since we decided to do a “shortcut” to bypass Arzua. Suddenly, coming over the next rise, we saw a man walking toward us. He was older, definitely not a pilgrim. Slung over his shoulder was a rifle. I found myself sidling closer to Andrew and planning my escape strategy. He was an old guy, so would I be able to outrun him? Push Drew into him and then take off through the trees? (sorry, honey) My fears were unfounded, though, as with barely a grunt he passed us.

An hour or two later we stopped at a crossroads. As we sat to have our lunch, a pickup truck pulled up behind us, and out stepped the same man! He came over and began speaking to Drew in rapid, unintelligible Gallego. He kept gesturing and pointing. Finally, I understood one word–conejo! Turns out, he was hunting rabbits, and was asking if we had seen any on the road. Nope, not a Thumper to be found, I told him. So he thanked us, waved, and drove off. One of our more random encounters.