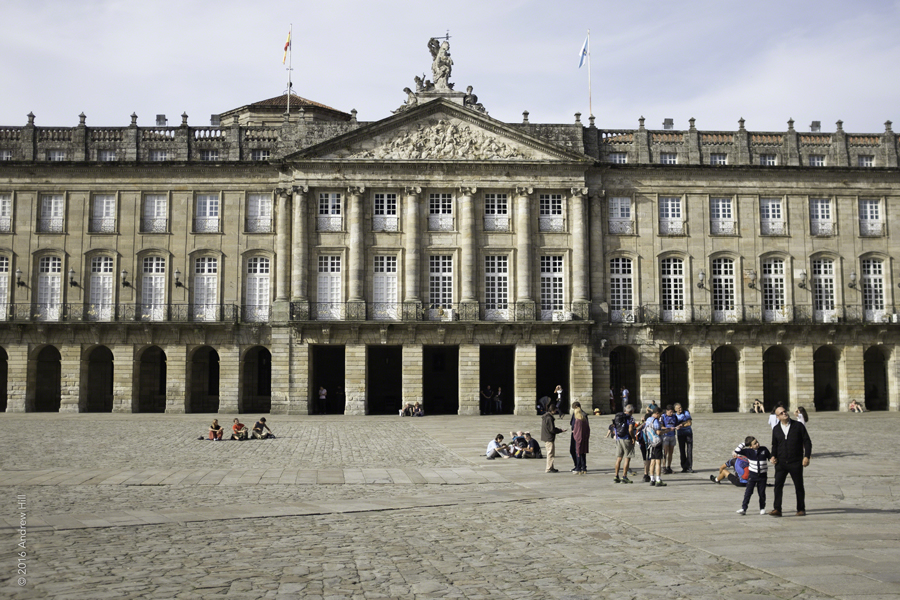 So we’re still in Santiago. Yesterday, after arriving at the Plaza de Obradoiro, we dropped our packs off and headed straight to the Pilgrims’ Office to get our compostelas. We met a cool guy in line, Hector, a coder from Barcelona.  He walks when and as far as he wants, stops where he wants (sometimes for weeks or months at a time) or when he has work to concentrate on. It was so nice to meet another road warrior/digital nomad! We don’t feel so odd any more. Plus, we have a new coding resource to tap when we need it. Bonus.

The actual getting of the compostela was so anticlimactic. I’m not sure what I really expected, but I guess I thought it would be a little more difficult, or require more proof or something. The rude woman behind the desk barely looked at me or my credencial. She had me list my name and my nationality on a spreadsheet, then asked what city I started the walk from. That was it. No checking if I had gotten stamps twice a day each day in the last 100km, no probing questions to see if I *really* did the walk for religious reasons. Easy peasy. Even got a cardboard tube to keep it in.

That evening, we all went to the Pilgrim’s mass at the Cathedral. The service was beautiful. All the pews were full, pilgrims stood or sat in every free space. There were several priests and nuns at the altar (there were some visiting priests from the US, Brazil and China, and they all said part of the service–an unusual, but very nice addition to the regular mass). The priests welcomed the pilgrims who arrived that day, and even recited a list of all the countries we represented (Go Philippines!). One of the nuns led the responses, which were all sung. Her voice was lovely. The icing on the cake was at the end, when the young, strapping monks pulled on large ropes and swung the botafumeiro, a giant silver censer filled with incense, across the church. It was an incredible sight.

After mass, we celebrated at a nice restaurant with Johannes, Juliana (who we met way back before Zenaruzza!), Juliana’s friend Jonathan, and Guido (another German guy, biker, who we had met in Sobrado do Monxes). It was such fun. Everyone was in a terrific mood, and we just laughed and joked and told crazy stories from our trips and described our families. I hope we have a picture of it somewhere.

Today, we woke up with very little planned except laundry. So over breakfast we began talking about what we wanted to do next. Originally, the plan was to get an airbnb somewhere around Madrid and just live for a bit. You know, work, chill, explore the town. But we both felt a little….unfinished somehow. So the new plan is to saddle up again in the morning and head even further west to the coast, to a town they used to think was the “end of the world”, Finisterre or Fisterra. It’s about 90km, so three days’ walk. Here we go again….